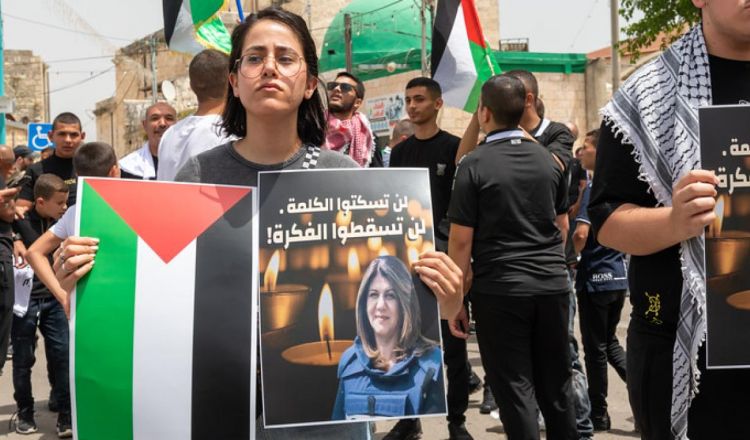 The killing of renowned Palestinian-American journalist Shireen Abu Akleh this week is just the latest incident of violence against reporters in Palestine. Abu Akleh, who spent three decades reporting on war and conflict, was reporting on an Israeli military incursion in the city of Jenin in the northern occupied West Bank on May 11 for Al Jazeera when she was fatally shot in the head. Media investigations indicate Israeli forces are likely responsible for killing Abu Akleh.

In an Al Jazeera video of the incident, gunfire can be heard in the first few seconds before a man yells "Shireen! Shireen! Ambulance!" An autopsy revealed that Abu Akleh suffered a cerebral laceration and skull fractures from a bullet wound. Another journalist, Ali Al-Samoudi, was shot in the back at the same time, the Palestinian Health Ministry announced.

“There was a tree separating from Shireen, I reached the tree before Shireen. She fell on the ground,” Palestinian reporter Shaza Hanaysheh said in an interview with Al Jazeera. Hanaysheh was with a group of four reporters covering the raid in Jenin. “The soldiers did not stop shooting even after she fell. Every time I extended my hand to pull Shireen, the soldiers fired at us.”

Who was Shireen Abu Akleh?

Born in Jerusalem in 1971, Abu Akleh studied journalism at Yarmouk University in Jordan. Upon graduating, she returned to Palestine where she worked for several media outlets, including Voice of Palestine Radio and the Amman Satellite Channel. She joined Al Jazeera a year after it was launched in 1996, as one of the Qatar-based outlet’s first field correspondents.

An icon in Palestinian media, Abu Akleh gained fame for her coverage of the second Palestinian Intifada in 2000, and her reporting on Israeli incursions into the West Bank in 2002. She reported on major events in Israel and Palestine in the years since, including the death of Yasser Arafat in 2004, the U.S. decision to move its embassy to Jerusalem in 2018, and Israel’s attacks on Gaza last year, to name a few.

“I chose journalism to be close to the people,” said Abu Akleh in a video prior to her death, adding, “It might not be easy to change the reality, but at least I could bring their voice to the world.”

[Read more: Tips and resources for covering issues related to Israel and Palestine]

Journalist Mohammed Ateeq, who was reporting in the region, told IJNet that Abu Akleh was wearing a press vest that clearly marked her as a member of the press. “What happened with journalists in Jenin was premeditated direct targeting, especially given that the bullet hit her right under the helmet,” said Ateeq. “Journalist Ali Al-Samoudi was also shot in an area not covered by his protective jacket.”

Abu Akleh’s death raises the number of journalists killed in Palestine to over 40 since 2000, demonstrating the danger faced by reporters in Gaza and the occupied West Bank. In just the past year, the Palestinian Center for Human Rights documented 150 attacks on the press. These include shootings that have resulted in 40 injuries and at least one death. They have also recorded 28 cases of journalists being detained or arrested, 23 media offices in Palestine destroyed as a result of bombings, and 20 cases of journalists prevented from carrying out their reporting by Israeli forces.

Abu Akleh’s killing occurred against this backdrop, a reality not lost among fellow journalists.

“The Israeli forces’ suppression of the press and its institutions is not new,” said Ateeq. “The recent event confirms that there is no protection for Palestinian journalists, and the justice stipulated in all international covenants is absent to hold the killers accountable.”

Hisham Zaqout, a correspondent for Al-Jazeera in Gaza, also spoke with IJNet about the incident. “Hers is a tragic murder, violating international laws and norms,” he said. “[Israeli forces] make relentless efforts to prevent the media from fulfilling its mission.” A 2021 Committee to Protect Journalists report, for example, found several instances of Israeli forces arresting and injuring journalists reporting in the occupied West Bank and Gaza.

Sulaiman Bsharat who manages the Yabous Institute for Consulting and Strategic Studies, echoed this sentiment. He described the risks Palestinian journalists must navigate, and how Abu Akleh’s death is reflective of them. “Israeli forces treat media crews as targets with the aim of preventing them from covering developments in the field,” he said. “The evidence for this is that most of the documented cases of targeted journalists were wearing their journalistic vests.”

This article was originally published on our Arabic site. It was translated to English by Sarah Abdallah.