Assange's Case, 'Disinformation Governance Board', and Others: Is The US on Its Way to Criminalizing Journalism? 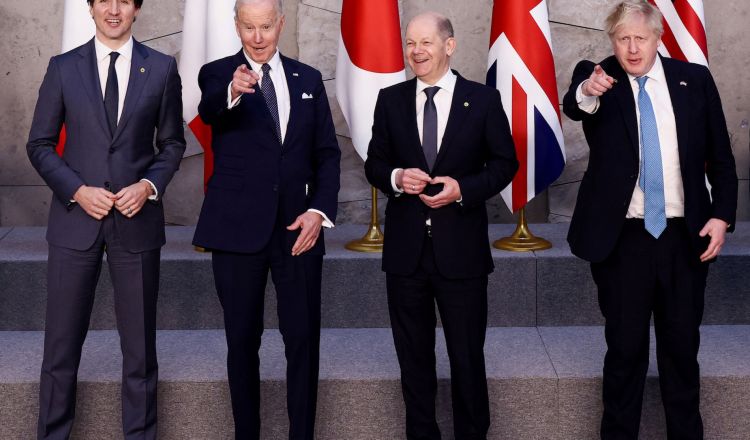 BRUSSELS, BELGIUM: US President Joe Biden and UK Prime Minister Boris Johnson pose for a G7 leaders family photo during a NATO summit on Russia's invasion of Ukraine, at the alliance's headquarters in Brussels, on March 24, 2022 in Brussels, Belgium. Both countries have introduced new mechanisms aimed at "debunking misinformation" about the Russian invasion [Henry Nicholls/Pool/Getty Images]

The US is on its way to criminalising journalism

Billed as a 'super fact checker', Joe Biden's new 'Disinformation Governance Board' is the first step on this path

The trial of Julian Assange and his almost certain extradition to the US should have been a much bigger news event. One explanation why it wasn't is that the general public both in the US and the UK is growing used to a crackdown from their governments on free thinking.

More and more energy is put into controlling narratives which emerge from an un-policed social media and a conventional media which has never produced more inept and lazy journalism than now.

The apex of a number of events including the Assange arrest, the banning of RT and Sputnik, as well as draconian media laws being proposed both in the UK and France, for example, is the announcement from Joe Biden’s administration of a new department which we are led to believe will a super “fact checker”, called the “Disinformation Governance Board”. It forms part of the Department of Homeland Security, no less.

The problem with such an organisation of course is that it will have the potential to do much more than what it says on the side of the tin. Such as being used by the government of the day to suppress any kind of reporting which it feels will do its own administration harm.

In many ways, the new department does serve a need from many corners of society who are alarmed by how entirely fictitious claims - particularly circulated on social media - can become established “facts” once they gain traction.

But on the other hand, are we really meant to trust that it won’t be abused by those in power? And isn’t its very creation a comical dichotomy of logic and supreme irony, in that it seems to have been triggered by the Ukraine crisis - a conflict which appears to be breaking records on made up stories, more, it could be argued, from the Western side than the Russian one?

Headed by a former communications advisor to the Ukrainian Foreign Ministry, Nina Jankowicz, one of the board’s first responsibilities will be to tackle head on “disinformation coming from Russia as well as misleading messages about the US-Mexico border,” according to CBS News.

And so, these two big subjects are what Biden considers possible zones where the media are not reporting in a manner or style which suits him; in the case of Ukraine, it’s surely more a case of how long can the partisan reporting from the West’s media continue when more and more fake reports keep getting exposed and journalists so far haven’t worked out that in war zones, military hardware usually gets sold to arms dealers so that the billionaires still remain billionaires.

What’s keeping Biden awake at night? Is it that he has succeeded in using Ukraine as an egregious distraction to his own failures domestically? Noam Chomsky put it well when describing what was happening in Washington during the second world war, which seems to fit with what we’re seeing now.

“You have to whip people into a frenzy and hysteria so that all people will care about is destroying the enemy and they will not care about domestic policies,” he once said. “It's an old story. It goes back to WWI. Back then the US media whipped Americans into such a frenzy of hate of Germans you couldn't play Beethoven and Americans went to war with enthusiasm to kill Germans.”

Biden, for the moment, has that frenzy to contend with as, indeed, does Boris Johnson in the UK.

If correct, those are rough odds and if mainstream media starts predicting them before the war shifts gear, then it will be the media which pushes Biden to fall on his own sword.

So far, Western media has been entirely complicit in shutting down any questions whatsoever about the nuances of the Russian invasion of Ukraine - either by “cancelling” those who ask difficult questions or by labelling them as “working for Putin”.

The recent shut down of both Russia Today and Sputnik was not something spontaneous by the EU, nor many European governments, we should note. As far back as 2016, the European Parliament set up a committee to debunk online Russian “propaganda” from outlets such as Russian state-controlled RT.

The 'bureau of disinformation' will be a tool to encourage sloppy, compliant reporting from Ukraine and crush any lone wolves who want to report nuance

Western governments have been trying for a long time in fact to shut down any narrative which questions their own and so this new “disinformation” board is an extension of this approach, now aimed domestically.

There’s never been a time when Western governments have wanted to control news more than now - even though most journalists writing about these vote-losing subjects (as Ukraine surely will be for Biden and probably Johnson) were already on board and playing the role required of them.

In just one week in the UK and the US, two alarming reports from mainstream media giants serve as an example of just how sloppy and compliant western media has become to what London and Washington require from it. The Times newspaper thundered recently that the “Ghost of Ukraine” pilot - a “hero of the skies” who flew his fighter jet against all the odds and shot down Russian pilots - had been killed. It even named him, only for the air force of Ukraine to finally correct the report and admit that the entire story was a myth.

Interesting, though, that the old rule that media doesn’t normally attack media is pushed aside when Forbes magazine led the zealous charge in putting the boot in to the Times.

But is this the same Forbes magazine, once a paradigm of long hand journalism, which tweeted days later that the EU was “poised to ban Russian oil imports”?

Fake news isn’t just coming from the battlefield of Ukraine, although for those who have the time to google, there are a small number of outlets which are exposing the slick PR campaign which is actually cooking up stories.

Fake news is also coming from news desks through benign, yet sloppy, “reporting” with little or no fact checking. The problem with the new department created by Biden is that it will probably not root out the fake news operators which serve his purpose, only those who do what proper journalists once did in abundance not so long ago: make a complete nuisance of themselves by asking awkward questions and unearthing scandals.

Being a “pain in the arse” as a senior CNN producer said that I was, when I insisted on not doing a report about the King of Morocco “clinging” onto power as it would have been entirely untrue.

The bureau of disinformation will be a tool to encourage sloppy, compliant reporting from Ukraine and crush any lone wolves who want to report nuance at the risk of being branded a Putin spy.

It’s naive of America to believe that it is anything more than a re-election tool of Biden’s just as it is naive to assume that the recent arrest in Ukraine of blogger Gonzalo Lira was nothing to do with America’s control of the narrative coming from US reporters there - as the Chilean blogger was detained almost a couple of days after the Daily Beast tore him to pieces.

Distasteful as some narratives may appear to be, they should still have the freedom to be heard.

The mindset of Biden and Johnson is to censor those who seek the “distasteful” truth.

To paraphrase Goethe, the truth can hurt and destroy those who look into its light for too long. The trick to remaining in power, which was always associated by Western media with the poorer Global South and its tyrants, was to remove those who held the torch. The news is that now this mantra is in the White House and Downing Street as well.

Martin Jay is a freelance journalist based in Morocco