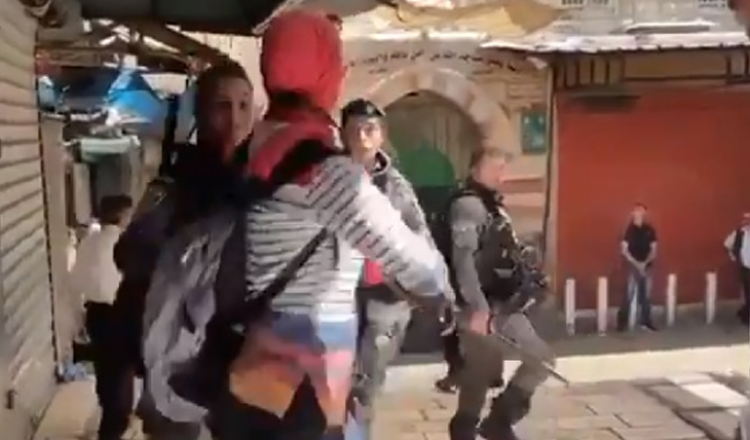 During the month of May 2021, The Coalition For Women In Journalism documented an astonishing 70 cases of murder, abduction, detentions, and attacks in the field, among other various kinds of violence towards women journalists. Read our report to find out more about the challenges women journalists face in the physical and digital world today.

One woman journalist was murdered/killed:

Palestine: Several sources in Gaza who spoke to CFWIJ confirm the killing of Palestinian journalist Reema Saad in a bombing. Reema was killed in her apartment alongside her children and husband when Israeli forces attacked civilian residences in the city of Gaza. Read the details of the case here.

One woman journalist was abducted:
Nigeria: Journalist Amra Ahmed Diska was abducted from her home in Yola, the capital of Adamawa State. Read more about the case.

At least 18 women journalists were attacked/impeded in the field:

Germany: Katherin Grabener and Antonia Yamin associated with Kan News and RTL news network were attacked by demonstrators at a pro-Palestine protest in Berlin on May 15. Further details here.

Kenya: DW East Africa correspondent Mariel Müller was injured while covering a protest in Nairobi when police authorities confronted the demonstrators. She was attacked by two tear gas canisters fired by the police, presumably to disperse the crowd. Details available here.

Palestine: Rama Yousef, a Palestinian journalist based in Jerusalem, was hit in the leg by a rubber bullet deployed by Israeli police on May 18. The journalist was reporting on the protest at Damascus Gate in Jerusalem when she was wounded. Read details of the story.

Palestine: Israeli forces bombed and damaged the offices of "Filastiniat" association and its affiliated news agency "Nawa". Since no prior warning was given before the attack, it resulted in two civilian casualties including one child. In a separate incident the same day, Palestinian photojournalist Latifeh Abdellatif was physically assaulted by armed Israeli officers for covering their actions on ground. Continue reading for details.

Palestine: The Israeli forces deliberately targeted Palestinian journalists who were covering the attacks and violations against worshippers in the courtyards of Al-Aqsa Mosque. Read more about the case.

Palestine: Gaza-based photojournalist Samar Abu Elouf was forced to evacuate her family after an Israeli missile struck her neighbor’s home. Samar is just one example of the thousands of Palestinians displaced by the relentless Israeli air raids. Read the full story here.

The Philippines: Correspondent for Rappler, Lorraine Ecarma was restricted by the police from covering the release of human rights activist and Lumad teacher Chad Booc. Further details here.

Somalia: Radio Kulme reporter Fardowso Mohamud Sahal was beaten and attacked by police while covering a protest in Mogadishu on May 16. Her equipment was also confiscated by security forces. Read further details.

Turkey: Journalists who followed May 1 Labour Day events across Turkey were prevented by the police. Their equipment was damaged and they were battered. At least four female journalists were subjected to police intervention while covering the events. Read more details.

Uganda: Teddy Nakaliga and a fellow journalist were attacked by Ugandan armed forces for covering a protest in Kayunga Village. Read details of the case.

And another 19 women journalists faced detention:

Algeria: The police arrested journalist Kenza Khattou, and at least 15 other reporters, on May 14 for covering an anti-government protest. Continue reading for details.

Belarus: Reporter Lyubov Kasperovich was sentenced to 15 days of detention over a charge of participating unauthorised demonstration. Read more details.

Belarus: After the massive crackdown against independent news website Tut.by, 13 employees, in which six of them women, of the outlet, remain in custody. More details available here.

Ghana: Zoe Abu-Baidoo Addo was illegally detained by law enforcement agencies who deleted data from her phone while holding her in custody. Further information available here.

NOTE: A journalist who does not wish to be identified at the present time was held in custody by her state’s law enforcement agencies and was eventually released.

Hong Kong: Nabela Qoser, a correspondent associated with Radio Television Hong Kong (RTHK), faced persecution in the workplace for her hard-hitting journalism. Reportedly, RTHK will not renew Nabela’s contract because of an ongoing probation period, forcing the journalist to quit by the end of the month. Details of the case are available here.

United States: Former Arizona Republic writer Emily Wilder was terminated by The Associated Press following criticism regarding her activism for Palestinian rights during her time at college. Find out more about the case.

Hong Kong: Nabela Qoser, a correspondent associated with Radio Television Hong Kong (RTHK), faced persecution in the workplace for her hard-hitting journalism. Reportedly, RTHK will not renew Nabela’s contract because of an ongoing probation period, forcing the journalist to quit by the end of the month. Details of the case are available here.

United States: Former Arizona Republic writer Emily Wilder was terminated by The Associated Press following criticism regarding her activism for Palestinian rights during her time at college. Find out more about the case.

And at least six were physically assaulted:

Côte d'Ivoire: Diane Kablakan, a correspondent for Ovajab Media, was physically assaulted by police trainees of the gendarmerie on May 9. Find details here.

Georgia: The Mtavari channel TV crew, along with journalist Nino Kekelia were physically assaulted by an unidentified group of men, while reporting on the Davit Gareja Monastery Complex on Georgia's southeastern border with Azerbaijan. Click here for more details.

Iran: Faeze Momeni, a correspondent for Event 24 News, was covering her assignment at Shahid Beheshti University when she was attacked by the security guards at the university, resulting in a broken finger and hospitalization. More details here.

Palestine: Riwa Murshid was harassed and threatened by members of a militant-organization for not covering her head. When the journalist responded, the assailant attacked her with a tree branch, leaving visible wounds on her body. Click here for more details on this story.

Peru: Correspondent for the Canal N and America Television, Stefanie Medina, was physically attacked while covering an assignment in the southern city of Ayacucho on May 19. Further details here.

Belarus: The loved ones of Belsat TV programme host, Arina Malinovskaya, were intimidated by the Belarusian authorities in order to pressurize Arina to return to the country. The journalist had left Belarus due to threats of persecution. Further details on the case available here.

Bosnia and Herzegovina: The Chairman of the Presidency, Milorad Dodik, threatened journalist Tanja Topić calling her an ‘agent of the German BND’ and a ‘traitor’ in a statement to the SRNA news agency from Republika Srpska. Read more.

Mexico: Journalist Ginger Gloom opened up about the threats she has received from Candidate for Federal Deputy, Ricardo Gómez Escalante. Find more details about the case.

United Kingdom: Rosamund Urwin, a columnist and senior feature writer at the London Evening Standard, opened about the persistent harassment and threats she has faced for the past two years. Find out more.

Belarus: The offices of TUT.BY media and the house of its editor-in-chief Marina Zolotova were raided by the Belarusian state authorities under the guise of tax evasion. Journalist Elena Tolkacheva’s house was also searched by the police. The media company's website was also blocked by the time of the raids. Continue reading for more details.

Hungary: Julia Halasz, a correspondent for the news website “444” was convicted for criminal defamation charges on May 6. Her case sheds light on the weaponization of defamation as a criminal offense in the country. Read more.

Russia: Tatyana Volstkaya was finally acquitted of the baseless charges filed against her for spreading misinformation on May 4. The Radio Free Europe/Radio Liberty (RFE/RL) correspondent was facing a criminal investigation for a story she published in April 2020. Further details here.

Russia: Lyudmila Savitskaya’s appeal to revoke her controversial status as “foreign agent” media in Russia was denied by the city of Pskov on May 5. Click here for more details.

Saudi Arabia: Prominent Saudi human rights activist and journalist Loujain Al-Hathoul appeared in the Saudi supreme court on Sunday, May 10. According to Loujain's relatives, the court upheld the initial verdict, affirming the terrorist charges against her. Find out more about the case.

Turkey: The first hearing of the trial against Roza Metina, the Kurdish editor of Jin News, was held in Diyarbakır. The court ordered the prosecutor's office to file its opinion and postponed the next hearing to September 14, 2021. More information here.

Turkey: The case against Etkin News Agency (ETHA) editor İsminaz Temel and reporter Havva Cuştan on terror related charges was yet again delayed based on technicalities. Read more about the issue.

Canada: The Edmonton Journal reporter, Lauren Boothby, was targeted online over her coverage about vaccination of Covid-19. The reporter received abusive hate mail after her article on May 15. Further details available here.

India: Vineetha Venu, a former journalist with leading Malayalam news channels, alleged that supporters of political party CPI-M have targeted her and her family on digital platforms ever since she covered a murder case in 2018. More information available here.

South Africa: Journalist Qaanitah Hunter was singled out in a Twitter attack by the ANC Women's League (ANCWL) president, Bathabile Dlamini. Dlamini attacked Hunter’s personal character, allegiance to the principles of feminism, and her professional integrity without any proof. Read more about the story.

And another three had to face racial discrimination/attacks:

Portugal:  TVI correspondent Conceição Queiroz was intimidated and racially attacked by a passerby during her live broadcast for 24 Journal on May 3. Read more.

Turkey:  Karel Valansi, the columnist of Şalom Newspaper, was targeted with antisemitic attacks by pro-govt media outlets after the Palestine conflicts. The journalist was also deliberately subjected to online smear campaigns after the publication of racist articles. Read details.

United States: Pulitzer Prize-winning writer and journalist for The New York Times magazine, Nikole Hannah-Jones was discriminated against for a tenured position that she was offered at the University of North Carolina. Read the full story here.

Canada: Producer and correspondent for The Calgary News, Jo Horwood, was harassed publicly by an unknown intruder while she was recording an assignment. Read further details.

But as always, we continue to find hope:

Turkey: The European Court of Human Rights (ECtHR) ruled that the prohibition on the investigation of the Parliamentary Investigation Commission was a violation of rights. The court made this decision based on the application submitted by journalist Banu Güven. Continue reading about the case.

Turkey: The house arrest against Pınar Gayıp, a reporter for the Etkin News Agency (ETHA), was lifted on May 18. Find out more about the case.

Turkey: The court acquitted journalist Melis Alphan from all the terror related accusations. Read about the case.