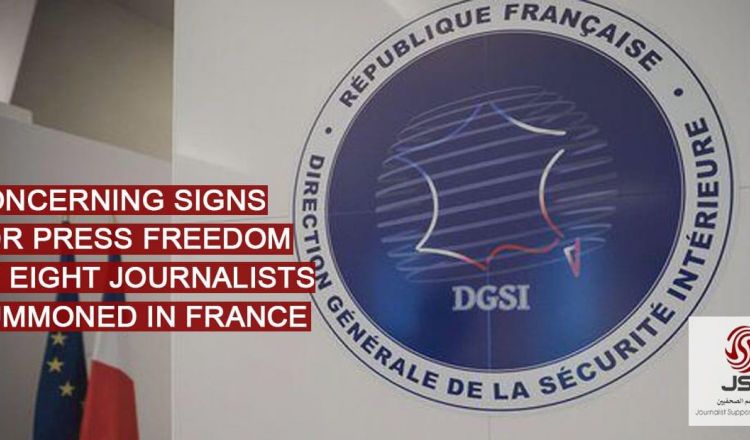 The Journalist Support Committee is concerned at developments in France which have included eight journalists summonsed in recent weeks in what is a clear affront to press freedom. These journalists who are reporting information in the public interest have been targeted by the DGSI (French General Directorate for Internal Security) for exposing corruption. Those summoned for questioning include journalists from the newspaper Le Monde, the television station Quotidien and the investigative site Disclose.

The first set of summons concerned those who leaked and reported the revelations which show that French weapons sold to Saudi Arabia and the UAE are being used in the war on Yemen and have been used in attacks on civilians. The next set of summons has been served to those who have reported on the conduct of Alexandre Benalla the former presidential security aide. Benalla is the subject of two scandals firstly he was filmed beating a protester whilst wearing a police helmet. Also, details emerged of a meeting arranged by former air force officer Chokri Wakrim between Benalla and a Russian oligarch about a private security contract.

Press freedom has been enshrined in French law since 1881, therefore, France should be setting an example to other nations however these recent cases indicate a growing threat to press freedom in France. The ability for journalists to report freely is protected in Article 10 of the European Convention on Human Rights. The European Union of which France is a member and therefore must adhere to has recently passed a law with the following directive - “protection of whistleblowers as journalistic sources is crucial for safeguarding the ‘watchdog’ role of investigative journalism in democratic societies.”

The Journalist Support Committee calls on France to not abandon its own tradition of press freedom nor to violate European Union standards for the protection of whistleblowers.