Excessive Use of Force against Journalists Covering "Yellow Vest" Protests 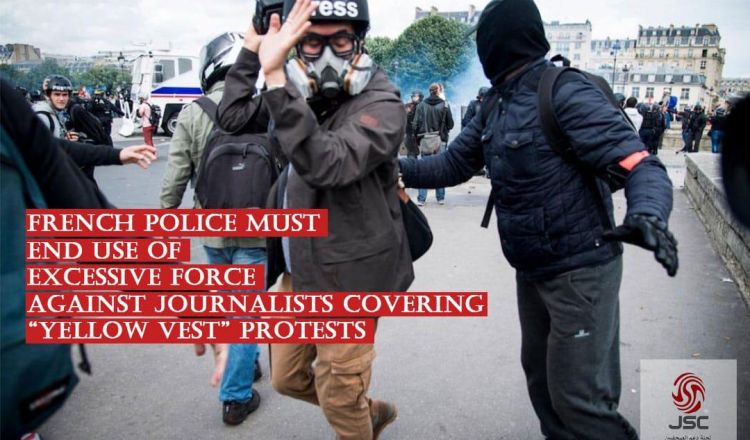 Half a year on since the first yellow vests protests police in France continues to employ violent tactics against journalists. The Journalist Support Committee calls for an end to these violent tactics of policing which have included the offensive use of batons and the utilisation of flash-ball rounds.

The Journalist Support Committee calls for an end to impunity for the police responsible for violence against journalists documenting the yellow vest protests. In February a photojournalist lost his fingers due to an exploding flash-ball grenade. At least 54 journalists have been injured by the police over the course of the protests according to Reporters Without Borders.

There has been a total lack of willingness on behalf of the French authorities to investigate these incidents. This is a major cause of concern for journalists in France who need reassurance that they can conduct their work safely without the risk of unprovoked police aggression.

The Republic of France has a long tradition of supporting the freedom of the press and, despite recent signs to the contrary, it remains among the higher-ranked nations for press freedom worldwide. However, unless there is an urgent investigation from the French ombudsman to provide justice and accountability for the violence perpetrated against journalists covering the yellow vest protests the international community will be forced to reassess the perception of France as a beacon for press freedom.

The Journalist Support Committee, therefore, calls for an end to French police violence against journalists in the streets of Paris, Toulouse and Nantes. And in order for there to be justice for those who have suffered serious injuries, there must be a credible investigation carried out by the ombudsman to look into all incidences of excessive police force against journalists over the last six months.