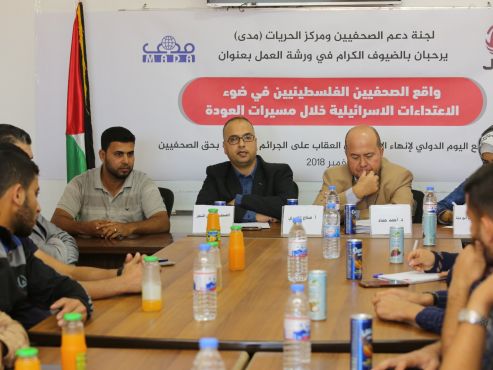 Media professionals, journalists and specialists discussed the reality of Palestinian journalists in the light of the "Israeli" aggressions during the great marches of return, in addition to the means of protection and ensuring their safety in the line of duty.

The announcement came during a workshop organized by the Journalist Support Committee and the Palestinian Center for Development and Media Freedoms (MADA) on the reality of Palestinian journalists in the light of the Israeli aggressions during the return marches, coinciding with the international day to end impunity for crimes against journalists.

Saleh al-Masri, Journalist Support Committee's representative in Palestine, described 2018 as the most difficult and challenging for journalists, where journalists Yasser Murtaja and Ahmed Abu Hussein were killed. Another 290 were injured during the return marches, most of them were attacked directly and deliberately, and are still being treated.

Al-Masri pointed out to the violations of the occupation in the occupied West Bank, punctuated by gunfire, arrests and the seizure and closure of printing presses and newspapers. He also noted that 19 journalists are held in Israeli prisons, some of them are still there for many years.

Al-Masri called for the necessity of unifying journalistic bodies in order to raise the concerns of journalists to international institutions, stressing the importance of activating citizen journalism to document violations of the occupation.

For his part, Dr. Ahmed Hammad, from the Palestinian Center for Development and Media Freedoms (MADA), assured if it weren't for impunity, the occupation's crimes and violations over the past years, would not have continued or escalated to such extend.

Dr. Hammad reaffirmed the center's ongoing work with various local, regional and international partners in order to put an end to impunity for crimes against journalists in Palestine and the whole world, and to reflect the objectives and goals of the UN resolution.

Hammad pointed out that the Israeli occupation forces used explosive bullets against journalists in the Gaza Strip and rubber bullets in the occupied West Bank, noting that last July witnessed an increase in the number of Israeli violations compared to last year, which amounted to 39 attacks in Gaza and 9 violations in the West Bank.

He called to hold the occupation accountable and to deny them impunity, and to expel the Israeli journalists syndicate from the International Federation of Journalists, pointing out that it is shameful to host the occupation's military spokesman through Arab media institutions, as well as demanding not to receive Israeli media delegations in Arab countries.

In the workshop, journalist Muthanna Al-Najjar talked about his experience during his work on the eastern border of the Gaza Strip. He stressed that journalists' work, especially during live coverage, is fraught with danger and threats, in which journalists experienced difficult times under direct targeting.

Al-Najjar pointed to some of the difficult situations that journalists had to endure, especially during their field work, which confirms that the occupation targets journalists directly, although their mission was to convey the truth.

Journalist Mariam Abu Daqqa spoke of her difficult experience during her work, especially when she was forced to convey the news of her brother's death while working for a local agency.

Abu Daqqa expressed that what she is doing is considered as a professional duty, stressing that the personal side cannot be separated from the professional side, which confirms the insistence and dedication of all media professionals to work in order to convey the truth.

In spite of what journalist Abu Daqqa has been through, she confirmed that she will continue her work and cover the events everywhere, stressing that the journalist is a human being who has become a part of the image he portraites.