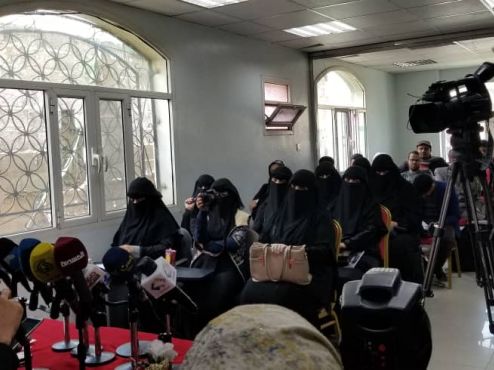 The Journalist Support Committee organised, on October 21, 2018, a seminar entitled “The Challenges facing Yemeni Journalists under Siege”, in collaboration with Sada Al-Ahdath institution for Information and development.

The seminar discussed three main papers. The first paper has been presented by Mr. Talaat Al-Sharjabi, a human rights activist, where he presented a legal reading to the criminalization of international conventions to impose a siege on journalists and the rules of protection of journalists in the light of the provisions of international law.

Al-Sharbaji assured that there is no role in the UN Human Rights to support the journalists. He pointed, as well, to the absence of the Humanitarian Law in resolving disputes in the presence of violations against journalist rights under the pretext of military errors. He, also, pointed out that since the beginning of the war on Yemen, the media played a prominent role in confronting the violations of the Saudi alliance and exposing its crimes. He said that the coalition forces launched large-scale arrests and forcible concealment of dozens of journalists and media activists on social media sites in the southern and eastern governorates where they faced all forms of torture and death.

On the other hand, the Saudi coalition knows the important role of media in revealing the truth to the world, therefore, they imposed an unjust siege on the arrival of international journalists and international news channels to prevent them from entering Yemen, citing that the coalition prevented a UN aircraft from entering Yemen due to the presence of an international journalist on board. Despite all these vigorous actions, only a small number of journalists were able to enter Yemen, where they were able to transmit only a small amount of the coalition crimes and violations through visual and printed reports.

In the second paper presented by Mr. Loay Al-Shami, Ministry of Information's communications director, he explained the challenges and the difficulties which are facing the journalists under the siege, specifically, when Hadi authorities prevented the journalist from entering to Sanaa. He, also, assured that the Saudi coalition prevented the UN from allowing about 110 journalists from different types of mass media to enter Yemen. Al-Shami added that all journalists, since the first month of the war, left Yemen except one, holding an Egyptian nationality, stayed in the country until 2016 and then he left. Al-Shami, also, mentioned the difficulties that are facing the journalist to reach the conflict areas to transmit the events as they are.

The third paper presented by the journalist Zakaria al-Sharabi discussed the impact of the siege on the transmission of the humanitarian crisis in Yemen to the world. He said that a large number of human rights violations were not covered by the international media that were, also, unable to transmit the deteriorated crisis since 4 Years.

At the conclusion of the seminar, there was a lot of interventions and participation from the attendees about the importance of transmitting the tragedy of Yemeni people to the world. The attendees thanked both the Journalist Support Committee and Sada Al-Ahdath institution for information and development for conducting this seminar.