638 Israeli Violations Against Journalists since the Beginning of this Year 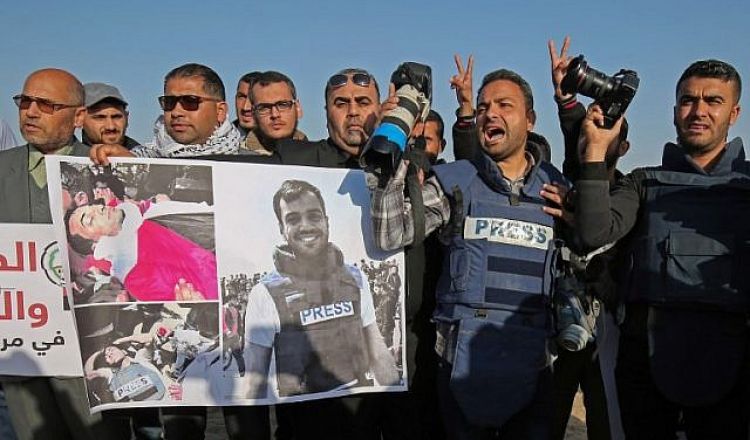 The Journalist Support Committee: 638 Israeli violations against journalists since the beginning of this year.

A series of continuous crimes are still perpetrating against the freedom of expression, targeting many journalists, media professionals and activists who record the suffering of the Palestinians with their pens and cameras under the clutches of the Israeli occupation. They also record the tragedy which befalls the Palestinians in conditions of injustice and oppression by Palestinian bodies.

We at the Journalist Support Committee affirm that the Israeli occupation is still discouraging in targeting the freedom of the press through increasing its aggression against Palestinian journalists without any international deterrent pressures against its crimes and continued violations and through violating the international and human rights conventions that enhance freedom of expression.

As we are celebrating the International Day of solidarity with the Palestinian Journalist which takes place each year on September 26, we assure that the occupation used excessive force without taking into account the principles of distinction and proportionality where no military necessity justifies it by using flimsy pretexts under the name of incitement.

According to a close monitoring of Israeli violations the most serious violations were witnessed in May 2018 reaching 129 Israeli violations, where the majority of violations occurred in the occupied Gaza Strip when targeting the Palestinian journalists and firing at them with live and explosive bullets and poisonous bombs while covering the march on the eastern border of the Gaza Strip.

The report showed that the violations included arrest, detention, extension of detention, and direct assault for the purpose of inflicting the utmost damage to them, such as firing live and metal bullets.

The report recorded 82 cases of arrests, detentions and summonses since the beginning of 2018, and 53 cases of extension of detention, postponement and sentencing of journalists detained in Israeli jails.

Concerning the number of casualties among the media professionals and journalists, the highest number of violations were recorded since the beginning of the year and amounted to 254 injuries, where 211 journalists and media professionals scored the largest part from Gaza Strip, which varied between direct assault metal bullets coated with rubber, gunshots, sound bombs and bludgeoning in addition to cases of suffocation and poisoning as a result of throwing poison gas and pepper gas on journalists while performing their professional duty.

The report documented more than 83 cases of coverage denial and obstructing the work of journalists,  including 31 cases of confiscation of equipment, identities, cameras, press cards and 6 travel ban cases.

The report also recorded 7 cases of incitement and accusation, and 35 cases of closure of institutions and sites, including the closure of the Al-Quds satellite channel, which is a Union member in working within the occupied territories in 1948 and Jerusalem city. Companies that provided information services banned dealing with this TV. In addition, the printing press of Elia Foundation for Youth Media, Al-Risala Media, the Palestinian Rai Agency and Al-Aqsa satellite channel were closed several times.

The report pointed out that the occupation stormed and raided many of the press and media institutions amid the acts of demolition and sabotage of 49 cases.

The occupation not only prosecuted journalists and their lenses while performing their work, but it reached out to torture journalists inside the occupation’s prisons and prevent their relatives and lawyers from visiting them and impose fines. 36 cases were recorded.

In commemoration of the day of solidarity with the Palestinian journalist, which falls on September 26 of each year, we pay a heartfelt tribute to the press teams working in the Palestinian press and media outlets for their great efforts in serving the Palestinian cause. We want to assure on a number of issues: