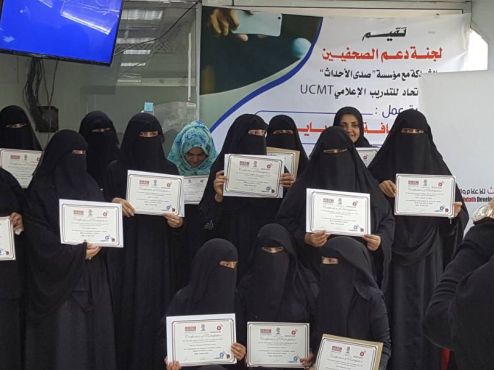 The Journalist Support Committee in Yemen, in partnership with the Sada Al-Ahdath development and media foundation and the UCMT Media Training Center, held a workshop on mobile journalism, Monday 23rd of April 2018, in Sanaa, Yemen.

The workshop was attended by 20 trainees from various media outlets and Yemeni news websites and lectured by Mr. Qassem Mateirk from UCMT through via Internet from Lebanon. The participants received a series of journalistic skills related to the nature of mobile journalism and its stages of operation, from the construction of the news story to its publication and the importance of technological development in serving this field.

Mr. Kassem Mateirk gave an opportunity to the trainees to participate in U-News Agency by manufacturing news and photo, considering that mobile journalism has become an important necessity for news agencies and various media.

He also considered that mobile journalism or smart journalism, as he called, established a new press industry driven by the great development of technology.

He also addressed the specifications and mechanisms of the journalistic industry, explaining the practical scientific foundations to be followed by the mobile press enthusiasts.

Mr. Kassem reviewed living models that sometimes fall under the so-called citizen press, which some consider as mobile journalism, such as the water spray on citizens, as shown in the citizens' photographs of Eastern Ghouta and have been considered as a model for journalistic work during the coverage of air strikes on al-Ghouta.

At the end of the workshop, certificates were distributed to the participants.